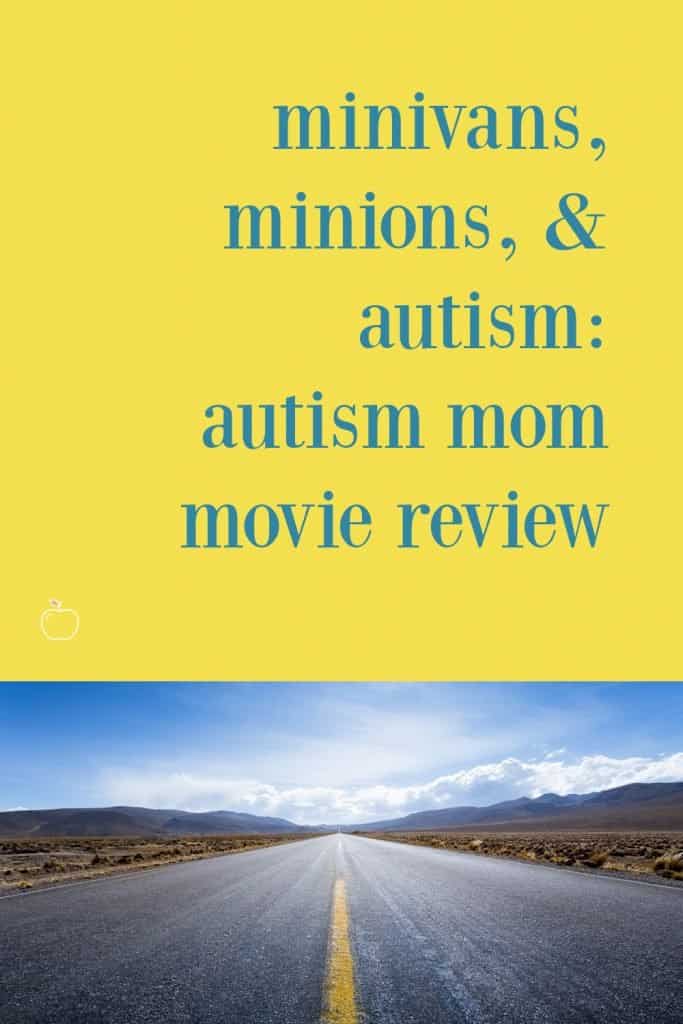 What is it about the Minions and Autism?

The seasons of life are even blurrier in our autism family than they are in most typical families.  Milestones are most certainly met – but on a very atypical timeline, meaning that days and weeks and months blend together in a way that can make progress hard to gauge.  In our life, our Honda Odyssey minivan is the backdrop- and often a supporting character – in so many of these developments.

We have used it for emergency wardrobe changes, and hiding from unexpected crowds at events.  Armed with Mr. Diggy’s handicap placard, we have used it as a “base” for tactical missions to specific exhibits or rides before immediately leaving.  We have weathered meltdowns, and driven in circles on nights sleep was slow to come.

More recently, we have even had injections and medical consultations while in our minivan.  But perhaps our most frequent (non-commute) use of it has been as a mobile movie theater, complete with snacks in the cup holder.

And while we certainly christened the minivan DVD player with some Thomas the Train, Elmo and Caillou disks, for several years now, the film of choice has been the Minions.  Which has made it the soundtrack of our lives – at least in the car.

While I know plenty of autistic individuals with an affinity for Disney, trains or cars, we’re in the Minion camp at our house.  And according to Google, we are not alone.  Search “minions and autism” and you’ll find 1.5 million hits.   Even though the movie didn’t garner much critical acclaim, it’s a winner in our house.

Because what is true in so many autism families, is that if something “works” you keep doing it. It’s why Mr. Diggy’s Groundhog’s Day birthday is so fitting – and why when the pandemic forced a repetitive sameness on so many households, in some ways, your autism family was way ahead, already immersed in your own personal continuous loop.

Why your autistic kid loves them:

Their language (or lack thereof)

The minions speak an unusual composite language of English and utter gibberish, with a touch of Spanish and French thrown in for good measure.  And we swear Mr. Diggy understands every word of what they say.

The yellow is bright, stimulating and attention-grabbing.  It’s hard to lose the minions on the screen (except in the scenes where ALL the minions are present at once!).  It is clear who you should be paying attention to.

Their (shared) love of bananas

One of the few clearly spoken English words in the movie is “bananas” – which also happen to be one of Mr. Diggy’s favorite foods.  Bonus:  there are plenty of shorts and still of minions eating bananas, which has been helpful in building vocabulary around food.

An area of incredible growth for Mr. Diggy has been increasing his use of “comments” on his AAC device, in particular, “ha ha ha.”  The minions provide many, many opportunities to comment with laughter.

The minions were the same age when dinosaurs roamed the earth as they were in the swinging sixties, angling to steal the British crown.  They are ageless, timeless adult-children who seem to be imminently relatable to many autistics.

What your autism family can learn from them:

Think outside the box

The minions are seeking the most evil boss for whom to work, but they are nothing but creative in their thinking.  They use costumes, camaraderie and creativity to get themselves into – and out of – some wildly sticky situations.  There is a place in this world for each and every one of our own austistic minions.

Yes, the minions talk nonstop, but the rest of the characters miss out on 99 out of 100 words.  But despite this seemingly limiting communication pattern, the minions continue to seek out, and work for, the most evil people they can find.  And that is their definition of success.

A place for everyone

Though their mission is non-traditional, there is a place for the minions in the world. And that is a fantastic reminder that all our square pegs will eventually find some square holes in which to find fulfillment in their lives.

As far as movie soundtracks go, this is a pretty solid one – all the more important if you are the driver of the minivan, so you are resigned to listening, not watching.  Sixties hits include Happy Together by The Turtles, My Generation by The Who, and a minion-y remix of the Beatles’ Revolution.

In the end, it’s about quality of life.  And for us, the minions embody that.  They are intent on living their best lives, and they – along with our minivan – help make our family’s version of autism a little brighter, and a lot more fun.

Groundhog Day: 5 Simple Lessons from the Movie for Your Autism Family

This website uses cookies to improve your experience while you navigate through the website. Out of these cookies, the cookies that are categorized as necessary are stored on your browser as they are as essential for the working of basic functionalities of the website. We also use third-party cookies that help us analyze and understand how you use this website. These cookies will be stored in your browser only with your consent. You also have the option to opt-out of these cookies. But opting out of some of these cookies may have an effect on your browsing experience.
Necessary Always Enabled
Necessary cookies are absolutely essential for the website to function properly. This category only includes cookies that ensures basic functionalities and security features of the website. These cookies do not store any personal information.
Non-necessary
Any cookies that may not be particularly necessary for the website to function and is used specifically to collect user personal data via analytics, ads, other embedded contents are termed as non-necessary cookies. It is mandatory to procure user consent prior to running these cookies on your website.
SAVE & ACCEPT
95 shares