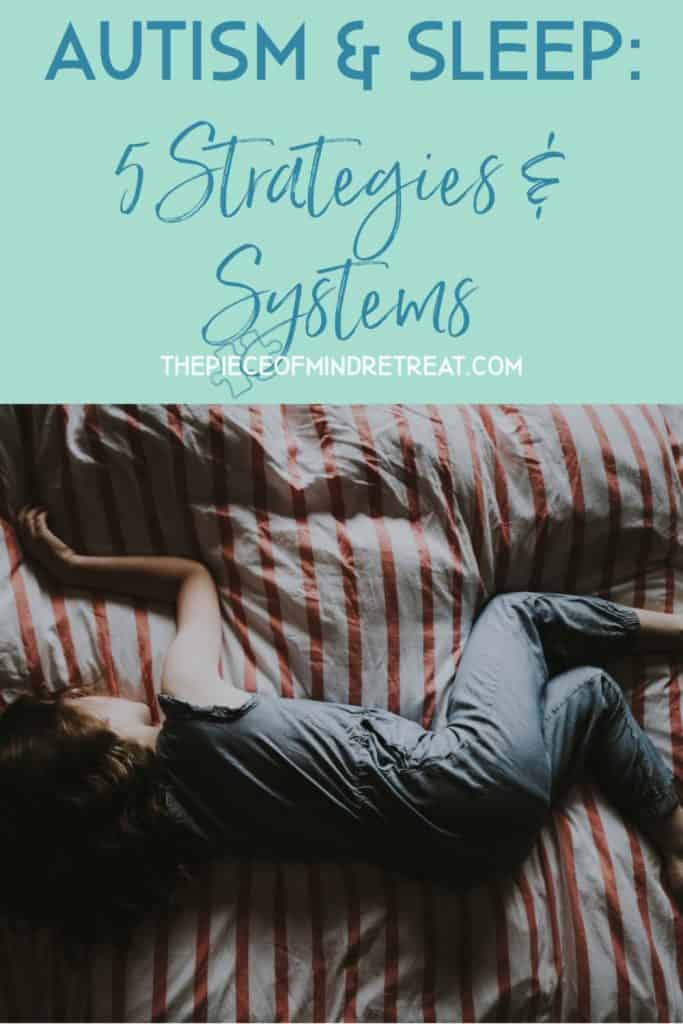 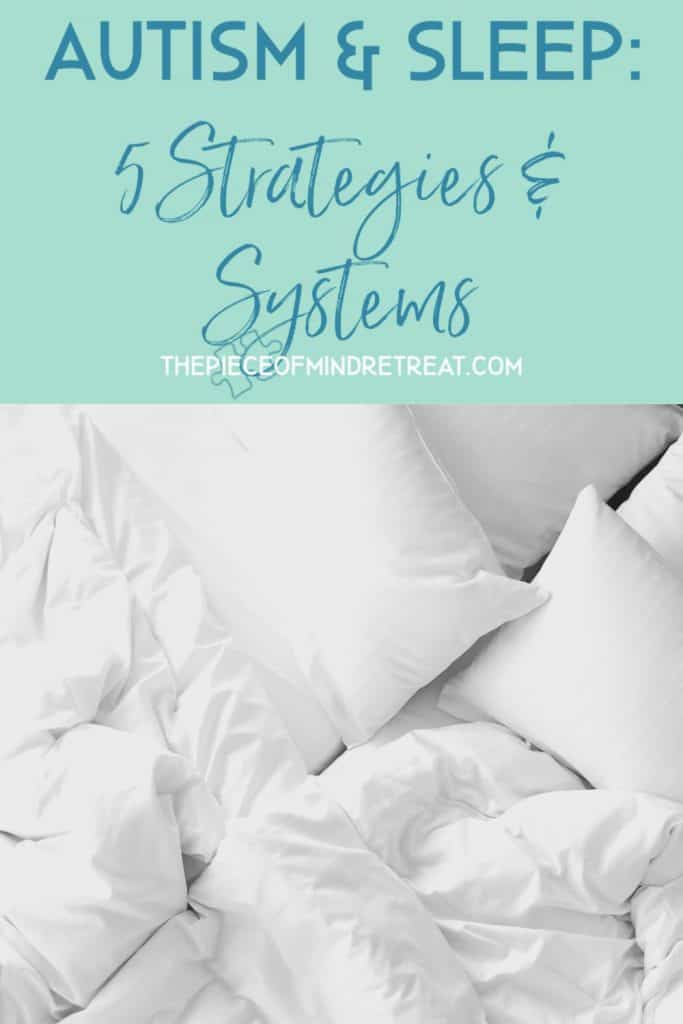 Or perhaps, more accurately, autism and LACK of sleep.  No matter what the age of your child, you may have spent hours searching for autism sleep advice.  There is little else in the world of autism parenting that more directly affects YOUR quality of life.

For us, the low point was when Mr. Diggy was four.  He was at a point where he was functioning on an average of 5 hours of sleep a night.  After hours of driving around the block (or the county!), we were lucky if he was asleep by midnight.

My husband took this late shift. I, on the other hand, took the early shift, springing out of bed around 5 am, when the baby gate we had latched in his doorway came crashing down, clattering on the wooden floor in the hallway outside his door.  We were burning both ends of the candle, and though it seemed that Mr. Diggy was okay with it all, one day I got the call that he had fallen asleep on the floor in the middle of a therapy session. He clearly needed more sleep to fuel his little body.

By necessity, we needed to act on this long before he turned four.  At two, he was pulling dresser drawers out of the slots and using them as his own makeshift climbing structure.  By three, he had ripped the closet doors off the hinges. So now, we have stopped fighting, and keep the room simple.

A (queen-sized) bed on the floor. (His dad is 6’4”, so the room to sprawl is helpful). A comfy loveseat with substantial cushions (makes it harder to pull apart!).  And on the top shelf of his closet, a row of open-top cloth storage bins – one for shirts, one for shorts, etc. Everything else in his room is either a pillow, a blanket, or a (safe) sensory item of some sort.

When your little autistic brain is revving at 11:30 pm, you think, it would be nice to to have some light while I jump on the bad.  At least, that is what 4-year-old Mr. Diggy decided would be nice. So we had to change his light. We had no table lamps in his room (see above), so the solution for us was to swap his ceiling light for a ceiling fan.

Once you pull the chain to turn off the light, you can flip the wall switch to your heart’s content. Sure the fan will go on and off, but the light won’t. After a few days (weeks?) of this, it becomes boring and the middle-of-the-night dance party loses some of its appeal.

As I mentioned earlier, we used to use a baby safety gate to try to keep Mr. Diggy contained in his room.  At some point, his little non-verbal self figured out that he could pile up his pillows and blankets as a ramp of sorts and climb right over the top.  So we bought a second gate and “tiled” them in the doorway, one above the other, creating a sorry sort of plastic door. Still, nearly every night, the gates would be shoulder-barged out of the door frame with a loud crash, resulting in a (usually very excited) child running through the house.

Next, we wedged the gates on the inside of the doorframe, which worked for a bit longer, until Mr. Diggy figured out how to pop them out on his side. This meant that they fell onto the carpet in his room, which meant on more than one occasion he was running around our house in the middle of the night without our knowledge.

When I ended up in a sleeping bag in the hallway in front of his door, I knew it was time for drastic measures. We hired a contractor to install a Dutch door in his room, and to flip the doorknob around, so the lock is on the outside. We basically created a permanent gate for his room. For the first time in months we had some peace of mind each night that he would be safe.

In the years since we created this solution, a simple product has created an elegant alternative: The Door Monkey. This simple latch allows light and air to pass into the room, but, when placed at the top of the door, still proves difficult to thwart. The Door Monkey has the advantage of being very portable (but we have a few on hand at the Piece of Mind Retreat, if needed).

But just because he was safely contained in a dark room for ten to twelve hours did not mean Mr. Diggy was actually sleeping – and thus we were also continuing to lack the sleep needed to manage him each day (let alone give proper attention to his then 7-year-old neurotypical brother, and my full-time job as a public school educator).  So back to that afternoon that he fell asleep in therapy.

While I drove to pick up my “sleepy” child from therapy, I made a same-day appointment at the pediatrician. Because it was a same-day appointment, it was with a provider who we had never seen before. By the time we arrived at the clinic (approximately a five minute drive), Mr. Diggy was literally running circles around the check-in desk.  The receptionist asked who I was there for – and I pointed to my “sick” kid who was shrieking with laughter as he lapped us at the circular desk.

Once inside the room, the on-call pediatrician looked at him (now he was tapping the nurse call button with intensity) and me (looking as though I had not slept a full night in months, because, of course, I had not). She then made a case for our family needing sleep to be able to handle the autism, and for Mr. Diggy’s already complicated brain requiring sleep to be able to benefit from any of the therapies we were throwing at him.

So she logged out of his patient account, and into that of another patient. She jotted down the name and dosage of a prescription that another one of her autistic patients had been taking for years.  And so began our journey with trazadone, historically an antidepressant, that, in small doses can help with sleep.

With the guidance of both our regular pediatrician, as well as our pediatric neurologist, we arrived at a combination of melatonin to help Mr. Diggy find sleep, and trazadone to help him maintain it.  With a few tweaks here and there, this combination has served him – and our family – well for over six years. It was not an easy decision to use sleep medication, but it has been truly life-changing for both him and us.

The room configuration and meds certainly helped a lot, but the one additional area that bears mentioning is the temperature of the room.  In the summer, when we have a heat wave, we roll a portable air conditioning unit into his room. Usually he wakes up early and by 6:00 am he has pulled the exhaust tube out of the window, so we do go in there around midnight and turn it off so he doesn’t turn the house into a sauna.

In the winter, we rely on our home’s furnace, as well as usually multiple layers of soft, fluffy blankets from Costco. Those blankets provide warmth and also a measure of sensory input. (To be fair, this is sensory that Mr. Diggy actually seeks year-round. In other words, that family you see on the beach with a warm blanket wrapped around their kid – that’s probably us!)

What sleep strategies do you use in your home? I’d love to hear in the comments below.

Want monthly updates to learn what’s new at the Piece of Mind Retreat? Click here to get insider access – and our monthly newsletter.

Autism Travel: 4 Rules for Where to Stay

Why You Need a Sensory Survival Kit

« Rethinking New Years Resolutions: 3 Ways to Reboot without Losing Confidence
What is a “Sensory Bank”? Essentials for the 5 Senses »

This website uses cookies to improve your experience while you navigate through the website. Out of these cookies, the cookies that are categorized as necessary are stored on your browser as they are as essential for the working of basic functionalities of the website. We also use third-party cookies that help us analyze and understand how you use this website. These cookies will be stored in your browser only with your consent. You also have the option to opt-out of these cookies. But opting out of some of these cookies may have an effect on your browsing experience.
Necessary Always Enabled
Necessary cookies are absolutely essential for the website to function properly. This category only includes cookies that ensures basic functionalities and security features of the website. These cookies do not store any personal information.
Non-necessary
Any cookies that may not be particularly necessary for the website to function and is used specifically to collect user personal data via analytics, ads, other embedded contents are termed as non-necessary cookies. It is mandatory to procure user consent prior to running these cookies on your website.
SAVE & ACCEPT
200 shares