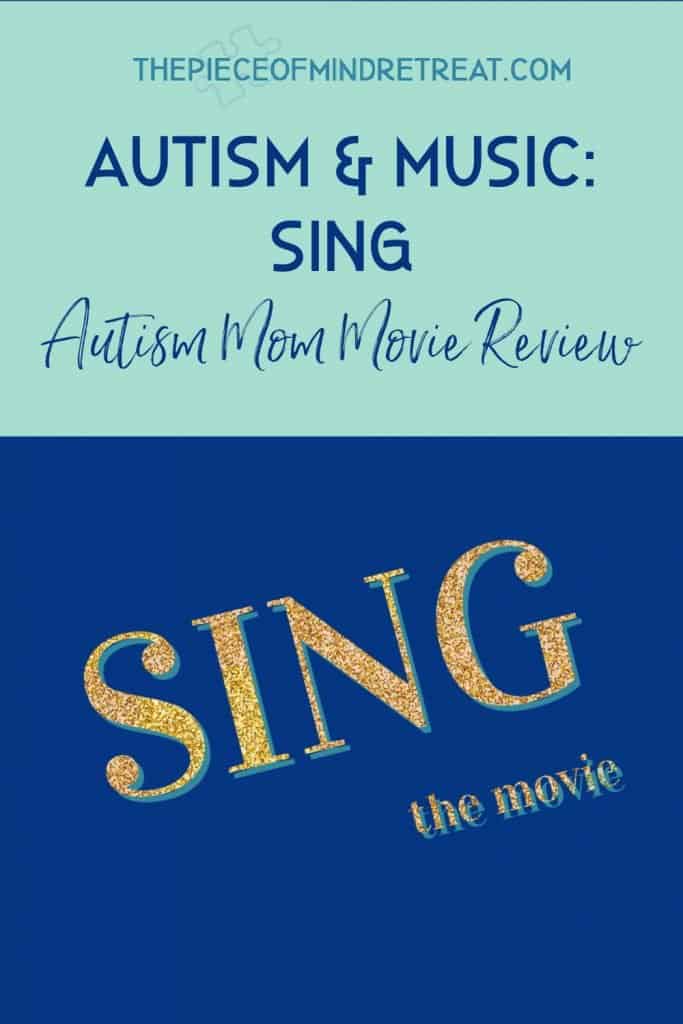 Do you see a connection between autism and music?

The adults in our home mostly listen to movies, either while driving, with the screen flipped down behind our heads, or from across the room while a rare YouTube excerpt holds Mr. Diggy’s attention for a few consecutive minutes.  So the soundtrack is important to us.  The combination of sounds and song in Sing make it a keeper – for both him and the rest of the family.

Though most human communication is non-verbal, if you have someone with limited or no verbal skills in your life, then you probably spend a lot of time wondering what is happening in their minds.  For Mr. Diggy, music seems to transcend the lack of more traditional means of communication.  Autism and music are inseparable in our family.

The characters of Sing all reflect a slightly different relationship with music and singing – but in the end, the power of music is transformative for them all.

Buster Moon (Matthew McConaughey) is a koala who literally grew up in the wings of his father’s theater.  He is captivated by the magic of the stage – yet has had difficulty hitting his stride after taking over the business following his father’s passing.  Yet he has a vision for a singing competition – and he sticks with it – finally resulting in a joyous celebration of song at the end of the movie.

Rosita (Reese Witherspoon) is a mom to twenty-five piglets.  Though she has always loved to sing, she has buried her talents in the chaos of motherhood and running a household of twenty-seven.  She figures out how to maintain a routine for her children and her husband Norman while still practicing her routine with her “spicy” partner, Gunther.  Though stiff and unsure of herself at first, Rosita finds her voice – and her hips – and wows the crowd in the show.

Ash (Scarlett Johansson) is a budding rockstar porcupine.  At first she is stifled by her mansplaining boyfriend, Lance.  Accepted into the show as a solo act, Ash bucks the pop-star persona and bubble-gum pink props suggested by Buster, and forges her own path, eventually bringing down the house with an inspired version of a song she wrote herself.

Johnny (Taron Egerton) is the gorilla son of a gangster.  Initially he plays along with dad’s plots and ploys, but when he is asked to fill a key role as a getaway driver in a big heist, the music wins.  Instead of waiting patiently during the robbery, he darts across town to a final rehearsal, stranding his father and the other thieves who get picked up by the police.  Though frustrated by his son’s choices, Johnny’s father does come around when he sees his soulful final performance – televised in the jail’s common room.

Mike (Seth MacFarlane) is a little white mouse with a big voice – and an even bigger attitude.  Entranced at the prospect of the grand prize of $100,000 in cash, Mike wheels and deals, cajoles and seduces, spending the money before it’s his.  With the prize off the table, he comes around, stealing the show with his rendition of Frank Sinatra’s My Way, sung from the heart, demonstrating just what is possible when you focus on the music.

Meena (Tori Kelly) is a teenaged elephant with a fabulous voice – and crippling stage fright.  After a flop of an audition, Meena is brought on as a stagehand.  As the story progresses the promise of her voice is revealed first to Buster, and then eventually to the rest of the world.  Her story embodies the hope and possibility that are possible when propelled by genuine courage.

How do autism and music play a role in your life? Which character do you connect with the most?  What about your autistic family member?

Groundhog Day: 5 Simple Lessons from the Movie for Autism Families

This website uses cookies to improve your experience while you navigate through the website. Out of these cookies, the cookies that are categorized as necessary are stored on your browser as they are as essential for the working of basic functionalities of the website. We also use third-party cookies that help us analyze and understand how you use this website. These cookies will be stored in your browser only with your consent. You also have the option to opt-out of these cookies. But opting out of some of these cookies may have an effect on your browsing experience.
Necessary Always Enabled
Necessary cookies are absolutely essential for the website to function properly. This category only includes cookies that ensures basic functionalities and security features of the website. These cookies do not store any personal information.
Non-necessary
Any cookies that may not be particularly necessary for the website to function and is used specifically to collect user personal data via analytics, ads, other embedded contents are termed as non-necessary cookies. It is mandatory to procure user consent prior to running these cookies on your website.
SAVE & ACCEPT
0 shares